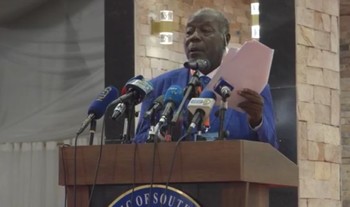 The Co-Chairman of the South Sudan National Dialogue, Angelo Beda, while launching the National Dialogue Conference on Tuesday in Juba said the people at the grassroots blamed the Sudan People’s Liberation Movement (SPLM) for failing the nascent country and plunging it into turmoil.

In a candid no holds barred speech, Beda said, “Prominent among the issues we found went wrong, is that the people at the grassroots blamed the crises in the country on the failure of leadership, particularly under the ruling party, the Sudan People’s Liberation Movement (SPLM).”

“When we reference SPLM, we are talking about the SPLM before it broke into the numerous factions as we know today. The SPLM took the helm of power in South Sudan following the signing of the Comprehensive Peace Agreement (CPA) in January 2005,” He added. “You cannot say you are SPLM-IO, FD, SSOA, you are all part of it because the people who broke, were at the top.”

Beda said the SPLM broke up, quarreled, and then engaged their tribes to fight each other, “so we blame the SPLM as such, not just the one whom we are with here but those who also left and went outside too.”

He was not pointing fingers at individuals but that honesty and transparency were required among the principles of the National Dialogue, “We are not doing this to name and shame our leaders, we do this as a way to seek the truth and to restore normalcy in our people’s lives.”

The Co-Chairman said the SPLM and its leadership, per the provisions of the CPA, was charged with the responsibility to build a new political system in South Sudan that was to contrast the then existing system in the Sudan that was perceived to be undemocratic, unjust, oppressive and based on parochial distorted Arab and Islamic identity.

“The SPLM demonstrably failed to build a new political system in South Sudan, so by the end of the six years Interim Period, the reverse was true, there was one system, two separate countries,” Beda said. “The SPLM simply took the poorer version of the Sudanese state and ran with it. Notably, the SPLM built an authoritarian system in the country, which is becoming more and more tyrannical, although without the substance and authority of a functioning state.”

Angelo Beda said one of the defining features of the authoritarian system instituted in South Sudan was the centralization of power in Juba.

“During the Interim Period, states had functioned largely without the interference from the central government. After independence, the central government took over state power, and governors were being dismissed and appointed at will. This choked and paralyzed the states and this contributed to the collapse of the system in the regions, which exacerbated instability across the country,” he said.

“As we speak, citizens’ civil liberties are violated daily. Freedom of speech, assembly, freedom of the press, and even freedom to associate politically have largely been curtailed by the state. People were arrested arbitrarily and detained, forced disappearance, as well as intimidation of journalists and political opposition leaders, are common occurrences in South Sudan,” Beda added.

The Co-Chairman said that the political conflict can be explained in part by the fact that the governing instruments of the SPLM were undemocratic, lacked political tolerance, and dogmatically followed a strict political hierarchy established during the war.

“Hence, those who had political aspirations had no chance, they must wait for their turn in what was a long line. This also meant that debates about the future of the country could not happen in the party, as such was considered indiscipline. This is why the party raptured and the resultant chaos is what the Steering Committee is assigned to remedy.” According to Beda.

He thanked the attendees for gracing and participating in the National Dialogue and invited them all to the closing ceremony slated for 15th November 2020.

President Salva Kiir Mayardit announced the National Dialogue Initiative with ten points on top of which was ’ending all forms of violence in the country’ on 14th December 2016. The National Dialogue consultation process started in early November 2017 at the local and regional level and was envisioned to end in mid-2018.

Kiir: National Dialogue resolutions to be included in permanent constitution