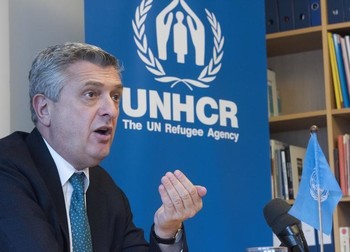 UN High Commissioner for Refugees Filippo Grandi called on warring parties in South Sudan, regional states and the international community to do more to end the ongoing conflict which has uprooted nearly four million people.

Grandi made the call during a visit to Al-Nimir refugee camp in East Darfur, Sudan, where he met South Sudanese refugees and their local hosts.

“My coming here has one reason - just as I did in Uganda, Ethiopia and from Juba itself, to appeal to the leadership of South Sudan, to the opposition of South Sudan, to the States in the region and to the international community at large, to inject some sense of urgency in the quest of peace in South Sudan itself,” Grandi said during the visit this week.

His call comes as conflict and drought have displaced nearly four million South Sudanese both inside the country and beyond its borders since violence erupted there in 2013. Efforts to restore peace have so far proven unsuccessful.

“The victims of this failure, so far, are the civilians. The civilians that we see around here. People that have left everything behind. Often women and children, without their men, to embark on an uncertain life because they are too afraid to stay back home in their villages which are affected by war,” Grandi said.

The UN Refugee Chief also highlighted Sudan’s key role in hosting hundreds of thousands of South Sudanese refugees. Al-Nimir camp hosts more than 5,000 refugees - over 90 per cent of them women and children.

Grandi praised the model of cooperation and coexistence between refugees and the local communities in Sudan.

The High Commissioner also appealed for more help for Sudan. “Often, we forget that Sudan continues to be a very key host country not just for South Sudanese but for Eritreans, Syrians and many other refugees,” he said.

On Wednesday, the UN Refugee Chief concluded his visit by meeting with Sudan’s leaders and authorities in Khartoum.