Machar to travel to Ethiopia for talks with Kiir 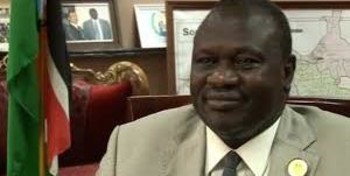 South Sudan's main opposition leader Riek Machar will travel to Ethiopia where he will hold face-to-face talks with President Salva Kiir next week, a statement said.

The meeting between the two leaders was proposed by the Intergovernmental Authority on Development (IGAD) during talks at the Council of Ministers’ extra-ordinary session in the Ethiopian capital, Addis Ababa last month.

South Sudan's President Salva Kiir and rebel leader Riek Machar will be meeting for the first time since mass violence began in July 2016. Discussions between the two men will centre on ending the conflict.

According to a statement issued by Mabior Garang de Mabior, chairperson of the SPLM-IO’s committee for information, Machar received the invitation letter by Ethiopia’s Prime Minister Abiy Ahmed for face-to-face talks with President Kiir in the Ethiopian capital Addis Ababa on June 20.

The opposition group reiterated its commitment to the ongoing peace process through the high-level revitalization forum in Addis Ababa.

South Sudan’s rebel chief Riek Machar has been under house arrest in South Africa since 2016.