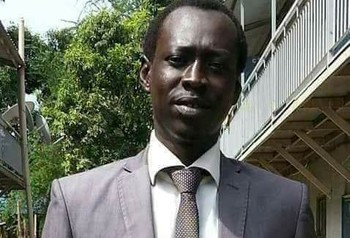 Mr Kuei was pronounced dead on Saturday evening by members of the opposition faction allied to former Vice-President Riek Machar, but the cause of his death remains unclear. He hailed from Akobo County.

“It is a shock to us all,” said Pouk Both Baluang, the SPLM-IO’s director for information and public relations in a statement released to the public.

“It is a sudden and great loss to members of the Sudan People’s Liberation Army/Movement-In Opposition (SPLM-IO/SPLA-IO),” he added.

Lam had worked for various local and international media houses as a journalist in Sudan and South Sudan. He was appointed as press secretary in the office of the opposition leader Riek Machar in January 2017.

He succeeded James Gatdet Dak, the former spokesman in Machar’s office who was deported and handed over to South Sudan government by Kenyan authorities in November 2016.

Several South Sudanese journalists and friends on social media described Lam’s death as a great loss to the media in the world’s youngest nation describing him as “a very gentle and humble soul” who got along well with everyone.