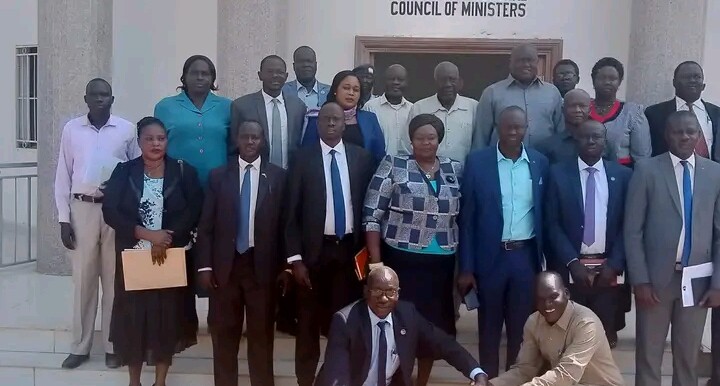 Lakes State Council of Ministers pose for a photo after their meeting on 20 January 2023. [Photo: Radio Tamazuj]

The council of ministers in South Sudan's Lakes State have passed a resolution deducting the basic salaries of the executive and constitutional post-holders to finance Rumbek University.

In a meeting chaired by Governor Rin Tueny Mabor on Friday, the ministers directed the state finance minister to deduct SSP 30,000 from ministers' salaries, SSP 15,000 from heads of independent commissions, and SSP 10,000 from members of the commissions.

The ministers say the money will be used to support student accommodation and increase the number of the teaching staff at the Rumbek University of Science and Technology (RUST).

William Koji Kirjok, the state caretaker minister of information and communication, told Radio Tamazuj that the ministers unanimously passed the resolution, adding that the resolution will remain in effect until challenges affecting RUST are addressed.

"The government together with the university should also talk with leaders in Juba and other members of the community to make a fundraising in the national, state, and county levels so that issues affecting university operation are addressed," he appealed.

He said the major challenge facing the institution of higher learning is a shortage of teaching staff.

"There is also a shortage of accommodation for the students," he added.

Minister Koji announced that in the next council of ministers meeting, a donation will be announced to immediately address the university's pressing needs.

“We are the hosts and most of the students who are currently in the University of Rumbek are sons and citizens of Lakes State. We as fathers, mothers, and parents need to do something to fundraise," he pleaded. "There will be a team that will go to Juba, the president will be informed about the situation in Rumbek University and is going to pledge his part of a contribution to Rumbek University."

However, a civil society activist in the state Daniel Laat Kon has criticized that move saying there are more pressing matters in the education and health sectors falling under the state and those should first be addressed.

He stressed that RUST is under the national ministry of higher education and that challenges facing the institution must be addressed by the ministry.

"At the state ministry of education in Lakes State, there are a lot of problems facing the primary and secondary school teachers. When
you visit Rumbek State hospital, you will find patients are given prescription papers to go and buy medicines from local pharmacies and clinics in Rumbek market instead of the state hospital," he complained.

Laat urged the state government to prioritize the delivery of basic services to the state.

Rumbek University is among the five public universities in the country. The other higher learning injstitutions are the University of Barh el Ghazal, University of Juba, Upper Nile University, and Dr. John Garang University.