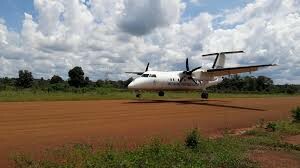 Authorities in Lainya County of Sectral Equatoria State say plans are ongoing to establish a local airstrip that will make movements faster and easier.

At the moment, a road network is the only means of transport connecting Lainya with other counties in the state, but the insecurity along major roads in the state is making movements difficult.

Emmanuel Khamis the County Commissioner of Lainya says they have already identified the place for the airstrip.

Commissioner Khamis said the state and local governments are involved in the plans and that the estimated amount of the project will be determined when the engineers visit the site.

"We are going to write to the state to designate engineers for the assessment of the area but as of now, we want to mobilize ourselves as the local community to clear the area and after that is when the technical report will come out on how much it will cost but not now," Khamis said. "We are targeting an area of 300 by 200 meters and it is located two kilometers from the new county headquarters in Lainya town payam."

Jande Robert, a resident in Lainya, said the airstrip will save pregnant women who require transferrals.

"We, as women in Lainya, are suffering when it comes to the time of labor. The good thing is that the establishment of the airstrip will help because sometimes it’s difficult to find a car to carry expectant mothers to Yei or Juba."

"This project is important to us as people residing in Lainya because if there are government officials who want to visit Lainya it will be fast and sometimes if the roads are not safe for movement officials can travel by air to and from Lainya," Samuel Modi also a resident of Lainya county said.