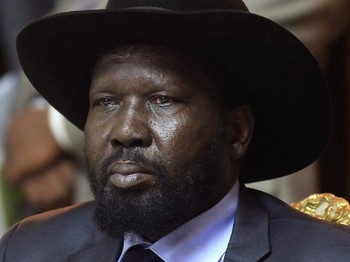 South Sudan’s President Salva Kiir Mayardit said his government had devoted major resources to war effort since 2013 instead of funding development projects in the country.

“The war has killed us and destroyed our country. We had some money but it has been finished by the ongoing war, ”Kiir said in his address after laying the foundation stone for Luri County headquarters on Saturday.

The South Sudanese leader blamed senior SPLM officials for causing the ongoing conflict in December 2013. “In November 2013, we organized a conference for investment in Juba, so those who came were millionaires; they came with their companies to develop South Sudan. But it turned into a curse because after one month, those who staged a coup said the money would come and they are ones to receive the money for development,” he said.

He reiterated his commitment to bring about peace and stability in the country, while urging the people of South Sudan to shun tribalism.

The world’s youngest nation has been embroiled in a violent conflict since 2013, when a split between President Salva Kiir and his former vice president, Riek Machar, escalated into outright civil war.

The devastating conflict has killed tens of thousands of people and displaced millions that have sought refuge in neighbouring countries.