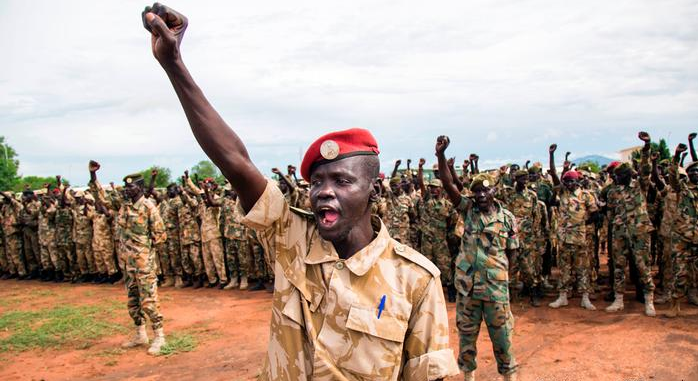 South Sudan’s cabinet affairs minister, who is momentarily the acting chairman of the National Transitional Committee (NTC), yesterday said that the principal signatories to the revitalized peace agreement on Wednesday met and agreed to expeditiously graduate 50,000 unified forces.

Dr. Martin Elia Lomuro was briefing the press after the meeting in which the Joint Defense Board (JDB) briefed the Presidency in the presence of a visiting Sudanese delegation led by the Deputy President of the Sudan Supreme Council, Gen. Mohamed Hamdan Dagolo.

“We attended the meeting to listen to the progress report of the JDB to verify the report they had presented earlier on the forces in the training centers across the Republic of South Sudan,” Dr. Lomuro explained. “This meeting was chaired by the President of South Sudan in the presence of the First Vice President and the Vice Presidents and Generals from JDB representing all the parties to the agreement.”

He added: “We were also graced by the presence of the Deputy President of the Sudan Supreme Council, Mohamed Hamdan Dagolo, the defense minister of Sudan and the also the Sudanese chief of military intelligence who represented IGAD and also came as guarantors.”

The acting NTC chairman said the report revealed the total number of the troops screened who were ready for graduation was 50,000.

“The report identified the total number of forces that have been screened, reorganized, and are ready for graduation. It showed that we have 50,000 (soldiers) comprising of the army, police, National Security, military intelligence, prisons, fire brigade, and civil defense,” he said. “It classified the number of forces in Greater Equatoria, Upper Nile, and Greater Bahr el Ghazal and it told us the forces in Greater Equatoria and Upper Nile are ready for graduation.”

Dr. Lomuro revealed that the Sudanese delegation advanced suggestions on how the command at the top should be shared.

“What the meeting decided was to give 7 days for the parties to the agreement, particularly to the President and First Vice President and the head of SSOA, for us to conclude the representation of these opposition forces in the command of the army,” he said. “Sudan has come up with proposals as to how we should share the command up in the top because we now have the ranks identified. So, we are now going to sit over the proposal that has been advanced by Sudan and conclude in the next 7 days so that these forces are graduated.”

“I think this is a very big development and we are happy that the comments, particularly from the SPLM-IO leader Dr. Machar with regards to the report, were very positive. His only concern is for us to agree finally on exactly how to share the top command of the army and not necessarily the command structure because we already have ranks identified so it is a question of unifying them and arranging them according to seniority,” Lomuro added.

Asked when the forces will be graduated, he said, “We will first have our meeting then decide when they will graduate.”

On the elections, Dr. Lomuro said it will depend on the government’s total assessment of the peace implementation process, the critical provisions, and actions that must be taken and implemented to make sure that the elections are credible, free, and fair.

“So, when we conclude our final report… we will ask; we are left with one year if we are going for elections, what are the things that we must do before that date? And are we all agreeing with it? Dr. Lomuro said. “If we are not going for elections, what is the reason and how do you address and inform the people of South Sudan and convince them to give time for you to be able to do the things that you need to do.”

He added: “It is not a question of saying it (elections) is tomorrow. It is a question of reading what needs to be done. For example, do we need a permanent constitution before elections? If not, why not and what is the alternative? I would say that a constitution is a basis for drafting the law for election but it is not the law itself. So if I have a law that is credible and can allow me to conduct free and fair elections, can I go ahead and we agree?”

He said security is key while holding elections and everybody should be free to contest and move around without being harassed or intimidated.

“The most important thing for elections is the security of the candidates, the elections process and movement, including provision for the prevention of rigging. Second is the credibility of the (electoral) commission itself. These are the things we need to discuss,” Dr. Lomuro said.

On the country’s poor human rights records, he took a swipe at the west and attributed the reports to rumors peddled by NGOs.

“All these reports are based on NGOs’ rumors. Yasmin Sooka has been to Juba only recently. I am not sure whether she has gone to the villages, the towns, and anywhere else. And she has been criticized. All the 82 ambassadors of African countries stood with South Sudan...it is only the Troika and a few others,” Dr. Lomuro said.

He said the arms embargo has been an impediment but that the government is going to graduate the unified forces regardless.

“It is better for us to do it (graduate the forces) and let those who sanctioned or embargoed us feel the shame,” he concluded.