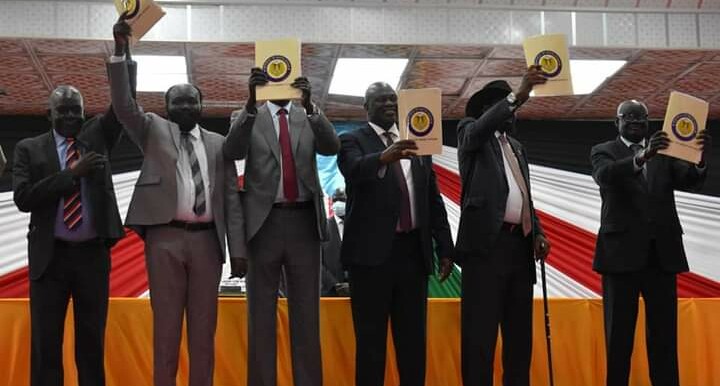 South Sudan President Salva Kiir Mayardit says the extension of the transitional period is not a ploy to maintain the status quo but is a calculated move to avoid another civil war.

Kiir made the remarks during the signing and formal declaration that parties to the 2018 revitalized peace agreement consented to extend the transitional period by 24 months. The occasion took place at Juba's Freedom Hall on Thursday.

"I want you to understand why we reached this decision. As seen in the unanimous decision across political parties, we are not extending the transition because I want to stay in the government longer. We don't want to rush you into an election that will take us back to war," Kiir announced.

Kiir admitted that as leaders they 'lost focus' after independence and began fighting each other for power instead of building a cohesive nation.

Although acknowledging that the peace agreement has stabilized the country and established a framework for building effective institutions, much remains unimplemented.

"I consider the reunification of the army, constitution-making, and the conduct of a census necessary to implement elections and establish a new government without reverting to war. Reunifying the army means we would protect the outcomes of the elections against spoilers who would use it as an occasion for violence," he said while explaining his priorities. "The constitution-making process will determine what type of government we need - decentralized, centralized, federal, parliamentary, presidential, etc. These choices, if wisely decided, will set South Sudan on a course of progress for centuries to come."

He adds, "The census will provide the evidence upon which we will determine the details of voting, state formation, and nation-building. We will redouble our efforts to complete these to lead you to a successful election and build an effective government."

"While we deliver this message with heavy hearts, we nonetheless have clear minds. We know this transitional government is not what you deserve, but it is better than war. So, we extend the transition period as a pragmatic and realistic choice for 24 months of healing and consolidating, President Kiir stated.

For his part, Dr. Riek Machar, First Vice President of the Republic, said it was paramount that the parties agree to the extension of the transitional period so that elections are held as spelt out in the agreement.

"There is no other choice and the extension was logical because the people of South Sudan have the right to choose their leaders," he said.

According to Machar, the peace agreement seeks to address the root cause of the crisis, and failure to fully implement it would mean a continuation of the crisis that has claimed thousands of lives.

"We have the political will in this extension and the specified period because the agreement cannot be implemented without a political will," Machar said. "The process of making changes in the security sector requires political parties to be engaged, and this is by providing political freedoms. Without these freedoms, we cannot achieve political transformation.

The agreement was signed by President Kiir on behalf of the ruling party – SPLM-IG, Dr. Machar on behalf of SPLM-IO, Gabriel Changson Chang for the opposition coalition, SSOA, Deng Alor Kuol for the Former Detainees, and Peter Mayen Majongdit and Wilson Lodiong for the Other Political Parties.

The extension has however received sharp criticism from some civil society organizations but most notably members of the diplomatic corps.

The United States, United Kingdom, and Norway boycotted the ceremony and expressed concerns that the process was not inclusive of all parties to the agreement.

In a statement, the three countries, Troika, called for inclusive consultations regarding the extension and a clear roadmap to achieve the remaining tasks.

"Our position will therefore need to be informed by whether such consultations take place. We cannot guarantee that we will be able to support a roadmap or an extension in other circumstances," the statement reads in part. "The roadmap must demonstrate how another extension will differ from the previous ones and include steps for clear progress in setting up the institutions and  mechanisms necessary to hold elections."