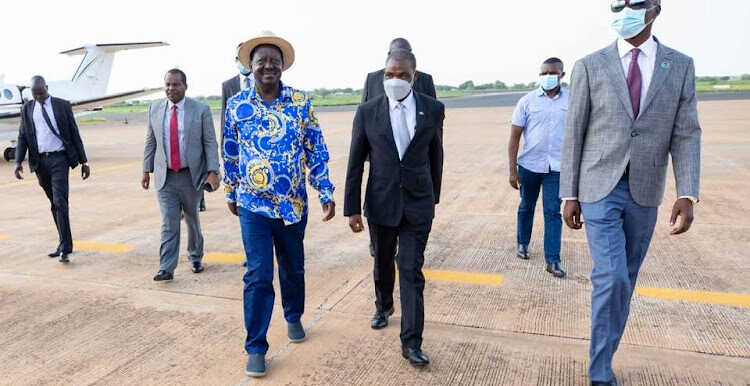 Kenya’s Azimio la Umoja presidential candidate Raila Odinga on Wednesday evening landed in Juba, South Sudan ahead of the commissioning of a 3.6 km Bridge that will connect Juba to the rest of East Africa.

On Friday, South Sudan's Information Minister Michael Makuei announced President Salva Kiir will be commissioning the bridge on Thursday, May 19.

The Bridge connects Gumbo to Lologo and is expected to ease traffic on the Gumbo Bridge that has gone several repairs and limited passage of heavy trucks importing goods from East Africa.

Raila, who is the High Representative for Infrastructure Development in Africa for African Union (AU), was received by South Sudan’s Roads Minister Simon Mijak Mijok.

Odinga, upon his arrival in Juba, tweeted: "Africa is busy expanding its infrastructure."

In March 2015, President Salva Kiir and the Japan International Cooperation Agency inaugurated the 3.6 kilometre-long bridge. The project was expected to reach completion within a few years after the inauguration.

But when renewed conflict erupted in 2016, Japanese aid workers were evacuated from South Sudan and suspended the construction of the Freedom Bridge.

In 2019 after the resumption of the construction, due to the COVID-19 pandemic, Japanese engineers working on the bridge were again evacuated, putting another halt to the construction.

The initial cost of the construction was $91 million but in 2019, the government of Japan pledged an additional $28 million for the completion of the bridge.