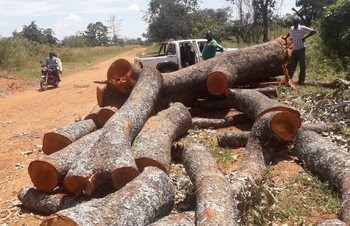 The threats come after the county authorities issued an order two months ago banning all illegal logging activities in the area.

Here are some of the audio recordings obtained by Radio Tamazuj from the suspected illegal loggers.

"As of tomorrow, you should not go to the office. I will start with you slowly. This is a threat to chaos in Kajo-Keji. If you want us to be taken to Juba together, I am with you. I will do anything and run behind the mountains there," one of the voices said.

Another voice said, "We are ready to die because we are right, and no office should be opened in the county this week. Whoever opens an office will know who we are. This is our message, if you are from the National Security or the army and intelligence, we ask you not to go there, and we do not want any open office, but if the offices are opened we will attack anyone."

However, Godwil stressed that the order will remain in force and everyone must respect the order.