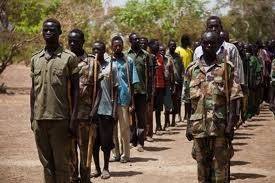 South Sudan has accused Sudan of killing and forcing recruitment of its citizens to militias whilst stranded in Sudanese states.

Senior South Sudanese official Barnaba Marial Benjamin told Radio Tamazuj that Khartoum is continuing extortion, forced recruitment of its citizens in armed militias to fight over the border and murder.

He said the Sudanese people are considered friends to the South Sudanese population noting that this policy will inevitably end when the National Congress Party disintegrates.