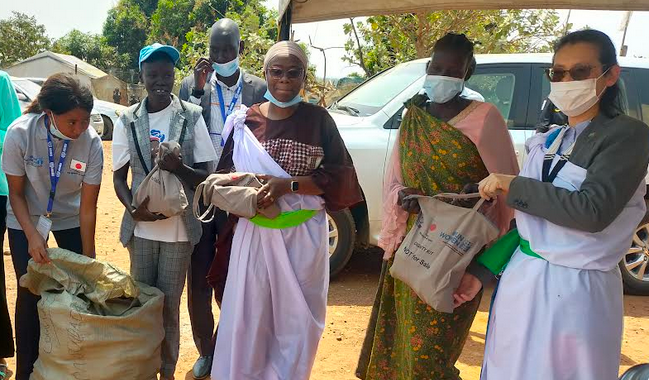 The Government of Japan through its embassy in Juba on Monday donated dignity kits to 1,000 women and girls in the internally displaced peoples camp, previously run by the UN as a Protection of Civilians Site (PoC), in Juba.

The donation of the dignity kits is part of a project being supported by UN Women and implemented by a National Nongovernmental Organization, Action for Sustainable Improvement and Management Organization (ASIMO), to fight Covid-19.

Speaking during the handover ceremony at the camp, Watanabe Tomoko, the Counsellor and Deputy Head of Mission at the Japanese Embassy said her country is working to help South Sudanese to build their country.

She said Japan is also helping assist in the implementation of the peace agreement and infrastructure development in South Sudan.

“Providing education is primarily the responsibility of the Government of South Sudan but Japan is here to help the efforts of the South Sudanese people to build this country,” she said. “From our embassy`s point of view, we do support the South Sudanese government in terms of the peace process and we support IGAD, R-JMEC, and CTSAMVM.”

“We do not only support the governance sector but also we do provide infrastructure projects such as the Freedom Bridge and in February Japan is going to handover the water treatment plant by the River Nile and we have an idea to provide sanitation vehicles to clean up Juba City,” Tomoko added.

On her part, Rukaya Mohammed, the Deputy Country Representative of UN Women in South Sudan, said they are implementing the project to create awareness among the camp’s inhabitants about Covid-19 vaccines and their impacts.

“The supply of the dignity kits was based on an assessment done in the camp and it was a real need. This project also provided access to vaccines. People, especially women, have this myth about the (Covid-19) vaccine and the uptake is very low because some say they will not get pregnant when they take the vaccine or that they will die so they also raised awareness about the importance of the vaccine,” she said. “They also dealt with the impact of Covid-19 and how it also increased gender-based violence.”

She added: “So, they are not only focusing on the vaccine but also raising awareness about gender-based violence and how women can protect themselves and they need to have a respective relationship in the camp.”

Meanwhile, William Deng, the executive director of ASIMO, the National Nongovernmental Organization implementing the project in the camp, said the provision of dignity kits helps women participate fully in society.

“The issue of the dignity kit is important for women and allows them to participate fully in society even if they are in their menstruation period,” Deng said. “These kits also help girls continue with education because some of them miss school because of lack of lack of dignity kits and that is why we are promoting this kind of support.”

Maria Nyataba, the women representative in the Camp 3 appealed for adult literacy classes for the displaced persons.