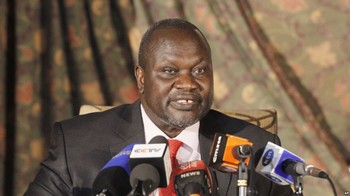 South Sudan’s former First Vice President is being held in South Africa to prevent him from going back to South Sudan.

The decision was reportedly reached by IGAD countries in order to keep him away in the hope of preventing fighting in South Sudan.

Ghandour said in response to a question asked by Al-Tayyar newspaper that all stakeholders in South Sudan should be engaged in the revitalization process for a peaceful resolution of the conflict in the world’s youngest nation.

Ethiopia’s Prime Minister, Haile Mariam Desalgen said the peace process in South Sudan does not require a new peace deal. He reiterated his commitment to find amicable solutions to the ongoing conflict in South Sudan.

“If they (South Sudan leaders) do not commit themselves to peace, their country will disintegrate,” he said.