I am ready to face the ICC, Kiir says 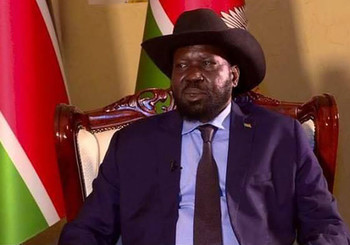 South Sudan’s President Salva Kiir said he is ready to face the International Criminal Court (ICC) if called upon to answer charges of war crimes committed during the civil war.

A recent report published by the London School of Hygiene and Tropical Medicine estimates that at least 382,900 people have died as a result of the country's five-year civil war.

President Kiir said in an interview with Citizen TV’s Jeff Koinange in Juba on Wednesday.

Kiir said he is not an obstacle to peace and that he believes the peace deal between his government and opposition groups would not collapse.

“I can guarantee that and I can assure the people that we will have peace in our country, and we are going to have it,” he said.

The South Sudanese leader vowed to work with his rivals during the transitional period for the sake of peace and stability in the country.

President Kiir admitted that there are government officials involved in money laundering in the country that has left many South Sudanese suffering in abject poverty.

When asked about what he was doing about money laundering, Kiir said he is currently focused on bringing peace before he takes action on whoever was involved.

“I don’t have time at this stage to account the people who have stolen money, I have to bring peace first then attend to the persons,” he said.

Kiir has termed General Paul Malong, the opposition official accused of committing atrocities while he was Chief of General Staff, a bad manager.

“Gen. Malong is one of the bad managers, if I have to describe him. I made him the Chief of General Staff because that was his seniority, I cannot jump him and bring a junior person above him,” Kiir said.