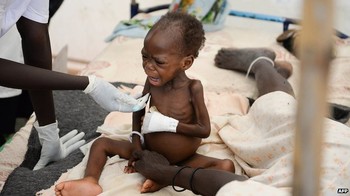 The death toll from hunger in Tali and Gemeiza Counties in Terekeka State rose to 45 from May until August, according to a report by local county officials.

Tali County Commissioner Angelo Maring told Radio Tamazuj on Thursday that at least four hunger-related deaths have occurred in his County in August.

The local official reported that the total number of people who died of starvation in Tali County since May stands at 38.

Meanwhile, Gemeiza County Commissioner Henry Ladu said that his County had recorded two deaths due to starvation this August.

Ladu pointed out at least seven people had died from hunger in Gemeiza County since July.

Ladu called upon all humanitarian agencies in South Sudan to assist the needy people of Terekeka State with food aid.

According to new analysis released recently, famine has eased in South Sudan after a significant scale up in the humanitarian response.

However, the humanitarian situation is still dire across the country as the number of people struggling to find enough food each day has grown to 6 million, and is the highest level of food insecurity ever experienced in the country.