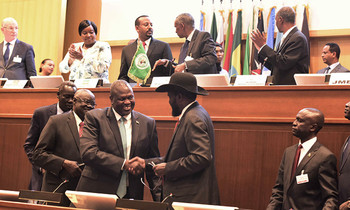 What Professor Mamadani said underscores what is at stake in South Sudan. Our sovereignty is under severe attack from the neighbours mentioned above. The possibility of losing it is quite real. Professor Mamdani certainly knows a lot about the South Sudanese crisis. The following is an excerpt from the African Union Commission of Inquiry on South Sudan issued on 15/10/2014.  "One of the members of the Commission, Professor Mahmoud Mamdani was of the opinion that the only and most appropriate option in relation to accountability is political accountability. It interprets to mean that political leaders identified as subjects for formal criminal investigations, should be excluded from holding office for the duration of the investigations and the duration of any criminal proceedings arising from such investigations".

The above is the advice of an honest expert who has got nothing to gain from rendering it to the South Sudanese people. He runs the risk of being at loggerheads with the government of his country (Uganda). His international fame is probably making it possible for him to speak up his mind in the lion's den without repercussions. But he is also being driven by his courage and conscience for telling the truth regardless of any other considerations. I doubt it very much that a less prominent Ugandan would feel safe to furnish such utterances. It appears South Sudan is gradually being led into unchartered waters by the regional powers.  It's being made and maintained as a failed State before our eyes. That suits many of the regional powers as it would ensure the continuation of the status quo and the plundering of our natural resources.

Two things caught my eye after reading the communique of the 33rd Extra-Ordinary Summit of IGAD Assembly of Heads of State and Government on 12/09/2018. Item number 10 says: "Decides that until his final status is determined at the upcoming Ordinary Summit of the IGAD Assembly, the SPLM - IO leader, Dr Riek Machar Teny shall be allowed to stay in a country of his choice in the region".

It's self-explanatory but what is clear is that the SPLM IO leader is not 100% free. He cannot travel outside the region without permission from the IGAD leaders. We have not seen him being convicted in a court of law, yet aliens curtailed his freedom. He could sue the IGAD for being kept illegally under house arrest in South Africa. This matter would be the subject of a future article because of its importance. How could people trust IGAD as a fair peace mediator when at the same time it plays the role of a captor? From another angle, and in light of what transpired from the Khartoum style of peace talks, one cannot help entertaining the notion that what was signed was indeed an imposed peace agreement.

Item number 11: Here, IGAD is pushing for the inclusion of Sudan, Uganda, Djibouti, and Somalia as guarantors of the revitalised peace agreement. Well, apart from Djibouti, the other three candidates are controversial. Sudan has got three issues that disqualify it as a peace guarantor in South Sudan. They are as follows:

Firstly, Sudan is still seeking a solution to the civil war in Darfur, Southern Kordofan, and Southern Blue Nile. It's engaged in an on and off peace negotiations with the Darfuri rebels and the Sudan People's Liberation Movement-North (SPLM-N). The United Nations - African Union Mission in Darfur (UNAMID) is operating on Sudan's soil rendering the much-needed peacekeeping services. Hence, if Sudan could not have peace within its borders and required international peacekeepers, then how could it be a guarantor for peace in another country?! It makes little sense.

Secondly, Sudan has territorial disputes with South Sudan in Abyei, Panthou (Heglig), Hofrat Nihas, Kafia Kenji, Mile 14, and other areas in northern Upper Nile. People should remember that there is an international peace-keeping force in Abyei. The United Nations Interim Security Force For Abyei (UNISFA) has been operating there since 2011. It means that Sudan harbours two international peacekeeping missions.  With the above in mind, how possible that Sudan could be a peace guarantor in South Sudan?!

Thirdly, Since the independence of South Sudan, the government of Sudan often worked to undermine South Sudan's sovereignty. Its actions came in different forms like the frequent bombing of areas in Northern Bahr Ghazal and Upper Nile. And its support for a plethora of small armed factions to destabilise the country. These acts make Sudan ill-suited to play the role of a peace guarantor.

It's baffling that Uganda should be proposed for a peace-keeping mission in South Sudan. To many South Sudanese its military intervention in the war on the side of the government in 2014; and the recent illegal deployment of the Uganda People's Defence Force (UPDF) in Equatoria; qualify it as part of the problem.

Furthermore, Uganda under President Museveni had acquired a reputation of a tendency towards incursions into the territories of some of its neighbours. On 19/12/2005, the International Court Of Justice issued a ruling ordering Uganda to pay the Democratic Republic of Congo (DRC) 10 billion US Dollars. It was in reparations for the looting and plundering of Congolese natural resources during the 5-year occupation of the eastern region by the UPDF.  It makes people wonder why IGAD would suggest a peace guarantor with such a record? But if you look closely, there is no wonder in that because President Museveni is on the "Selection Board".

The suggestion of Somalia as a peace guarantor raises many eyebrows. Somalia has one of the most extended peace-keeping missions in the world.

Uganda has got troops in the African Union Mission in Somalia (AMISOM) which is funded by the United Nations. The situation is somewhat similar to that of Sudan. Again, here is a case where a country needed foreign troops to maintain peace within its borders but at the same time is being proposed to send troops to keep order somewhere else. It's very ironical.

IGAD is neither funding the Regional Protection Force (RPF) nor the proposed additional forces. Therefore, why not bring troops from outside the region as it's abundantly clear that Sudan and Uganda are not neutral and have vested interests in South Sudan.  With Djibouti aside, and for the above reasons - these countries are unfit to participate in the peace-keeping mission let alone being guarantors of the peace process. There got to be a criterion for eligibility to undertake a peacekeeping mission. Looking at the UN peacekeeping missions across the globe, you would realise that the forces are selected from countries free from armed conflicts. Peacekeeping is not only to silence the guns but to promote the culture of non-violence through education and other means. Forces from countries in turmoil or going through civil wars would less likely deliver such services. In light of the above, It's fair to say that the only criterion used by IGAD in selecting the peace-keepers and guarantors, is the one that serves the IGAD member States' interests. The interest of the people of the country at hand is a secondary thing if at all it crosses their minds.

Those in the opposition who signed the revitalised peace agreement tried to persuade others into signing the deal on the basis that their reservations would be considered at the summit of IGAD Heads of State and Government. It transpired that their reservations were ignored. They were not even allowed to present their case before the IGAD leaders. Instead, we were told that President Omar Al Bashir would present the reservations on their behalf. Well, we have heard of wars by proxy in international politics but never did we come across negotiations by proxy. Each opposition Movement, party or organisation is supposedly representing a constituency within the South Sudanese people. Their constituencies and indeed the entire South Sudanese people expect representation with courage, dignity and high moral standards. Above all, they hoped that they would safeguard the interests of the country and not allow themselves to be pushed around. What's the point of voicing out reservations when at the end of the day you succumb to what has been offered to you?! And what's the purpose of the peace negotiations if the whole thing is unidirectional in favour of your opponent?!

One critical issue that the whole peace project hinges on is funding. Neither IGAD nor the African Union (AU) has the resources to fund the revitalised peace agreement. The Troika group of countries and the European Union (EU) have made it clear that they would not provide any funds should there be no full commitment to the implementation of the agreement. The US government has further reaffirmed that position with a statement of its own. Hence, securing the funds would likely emerge as a big problem. I would not be surprised if the government pledges to pay for everything from the oil revenues. It would be in its best interests as by doing so it would have hit two birds with one stone. Firstly, it would have operationalised the revitalised peace agreement against all the odds. And secondly, it would have succeeded in having those who signed the deal in its pocket. But as long as the root causes of the conflict aren't addressed head-on, peace would remain wanting in the Republic of South Sudan.

As for the opposition groups that have rejected the revitalised peace agreement, they have a lot of hurdles ahead of them though they aren't insurmountable. They should get comfort in the fact that they are on the side of the people which is the right side of history.