Skip to main content
Toggle navigation
العربية
Home News Graduation of unified forces: is it a question of lack of arms?
JUBA - 19 Oct 2020

Graduation of unified forces: is it a question of lack of arms? 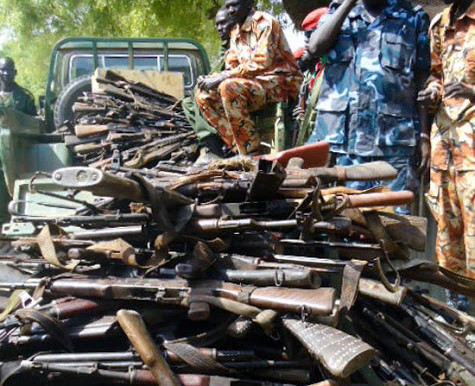 File photo: Small arms collected in a past disarmament exercise

The South Sudan government says it cannot graduate unified forces who have been in training for more than ten months as part of the security arrangements implementation due to lack of guns, citing an arms embargo imposed by the UN Security Council as hindering the process.

According to the September 2018 peace deal, government and opposition forces were supposed to canton, register, and train unified forces during a 3-year transitional period leading into elections. But two years on, observers warn the process is lagging and threatens the peace implementation.

“We spoke with the president about the South Sudan peace implementation, especially why unified forces have taken a long time before graduating. The president informed us that this has not happened because the country does not have guns for the new graduates as a result of the arms embargo," said the Sudanese Deputy Chairman of the ruling Transitional Sovereign Council Mohamed Hamdan Dagalo after meeting President Salva Kiir Mayardit in Juba a fortnight ago.

Hamdan, also known as Hemeti said the meeting aimed at reviewing both the Sudan and South Sudan peace processes in a statement broadcast on the state-run TV (SSBC).

In 2018, the United Nations Security Council imposed sanctions, including an arms embargo against South Sudan where the political crisis has caused deaths and massive displacement.

Ruai stressed that the graduation of unified forces could not take place as planned due to a lack of guns and other military equipment.

“Those guns being collected from the hands of civilians have expired and it will not be possible to graduate the national army with expired guns. The unified forces need to be equipped with new guns for them to be able to protect the country and the citizens,” Ruai said. “Some of those soldiers who reported to training camps came without guns, especially some soldiers from the opposition side reported to training sites without any guns.”

The army official blamed the 2018 arms embargo issued against the country as the reason behind the delay in the graduation of the unified forces.

While appreciating the efforts by some neighbouring countries who pledged and supplied the forces with uniforms, Ruai alluded that there are countries interested in supplying arms but are restrained by the sanctions.

He urged the peace partners including IGAD, EU, UNMISS, and others to work closely with the government to support the implementation of the revitalized peace agreement.

In a statement to Radio Tamazuj, the Chief of the UN Radio Miraya Ratomir Petrovic said the UN Mission in South Sudan, UNMISS, has and continues to play its role in the implementation of the peace agreement.

“First, it should be clear that the arms embargo is under the purview of the Security Council which makes its decisions completely independently of UNMISS. UNMISS has provided technical support to the implementing bodies and has provided logistics and transport to ensure that the cantonment sites receive the food and equipment they need,” he said.

The UNMISS statement also indicated that some progress had been made in the peace process but 'political will appears to be waning and momentum by the parties is urgently needed.'

For his Part, SPLA-IO spokesperson William Gatjiath Deng said President Kiir intends to frustrate their forces at all the training sites to desert the camps.

He claims that Kiir's forces have been given arms and receive a salary.

“I don’t agree with Kiir saying there are no guns to graduate the forces in training sites. The government is in control of all the country's resources and they imported guns. Juba military stores are full of guns, but Kiir doesn’t want peace in the country. What Kiir and Lul Ruai said, is not true," he said.

Gatjiath explained that their forces have spent more than 13 months in the training centres amidst deteriorating conditions. He alleged that the Juba regime is not willing to implement the security sector reforms as spelled out in the agreement.

Edmund Yakani, the Executive Director of the Community Empowerment for Progress Organisation (CEPO) dismissed the notion that the government lacks guns for graduation, saying that's a non-issue.

“We have collected enough guns through the disarmament that happened in the country and some of those guns are brand-new guns recently bought. The question is, where are those guns collected from the disarmament exercise since we have no credible information that those guns were destroyed?" he wondered.

Responding to the government's assertion that the guns available are expired, Yakani said, "I don’t think those guns are out-dated, we saw images from guns collected from Bahr el Ghazal region particularly in Lakes and Warrap, the guns collected from civilians are the same guns the army is using now.”

He stressed that the priority should be on the structural changes of the army and addressing the issue of loyalties.

“Those forces were not recruits, those are soldiers who were by then holding guns, where were the guns they were holding before in their hands. Can’t we graduate them with their previous guns because these are not recruits coming with an empty hand or with sticks,” Yakani said.

According to the activist, the elephant in the room is the lack of trust and political will by the parties to the agreement.