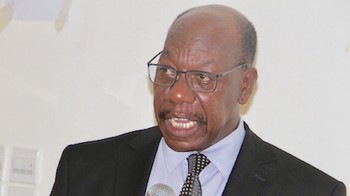 South Sudan’s peace monitors, the Reconstituted Joint Monitoring and Evaluation Commission (RJMEC) have urged the Revitalized Transitional Government of National Unity (RTGoNU) to graduate the first batch of forces in cantonment sites across the country.

The South Sudan government has in the recent past attributed the delay in the graduation of the unified forces to a lack of guns, citing an arms embargo imposed by the UN Security Council as hindering the process. But after a meeting with peace observers, the National Transitional Committee-a body tasked to oversee the implementation of the security arrangements-promised that the graduation of forces would take place early this month. However, no date was mentioned.

Tai said, “It is important to note that RJMEC mandate does not have anything to do with an arms embargo. However, in my view, the graduation of phase one of the unified forces is critical as it will help in trust and confidence-building among the parties and ease the suffering of those troops in the training areas due to scarcity of resources.”

He added that the graduation of the first batch will be a step forward toward the initial establishment of the unified forces as dictated by the peace agreement. The forces have been in cantonment sites across the country since January 2020 amidst poor conditions including a lack of food and medicine.

“This will also allow the mechanisms to reorganize themselves and strategize on better management as we commence phase two of the training of the unified forces,” he noted.

According to Chapter Two of the revitalized peace agreement which consists of the security arrangements, government and opposition forces are supposed to canton and train unified forces during a 3-year transitional period leading into elections.

Tai says the process is slow and with a lot of logistical, administrative, and management challenges but the responsibility to facilitate the implementation squarely lies with the government.

“But the emphasis is on the RTGoNU to lead. The agreement set up various institutions and mechanisms to manage the delivery of Transitional Security Arrangements, and it is up to these legitimate bodies to determine how this is done…The protracted delays and passing of time without progress could potentially reverse the gains that have been made so far," Gen. Tai asserted.

He further pledges to continue to engage with the leadership of the RTGoNU, conduct more seminars and workshops with the mechanisms and offer technical support where necessary.

“We shall also continue to engage with the regional leadership and international partners who are the guarantors and partners to the peace process; and more importantly with the IGAD and AU, to ensure RTGoNU and the parties implement the agreement which they signed and committed to implementing,” he concluded.

Forces at different cantonment sites and training centers across the country have reported poor conditions in sites making it unbearable for many who end up abandoning the training.