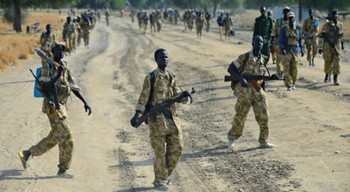 The group fighting to topple Kiir’s government in Juba is under the command of Agany Abdel-Baqi Ayii Akol, a native of Aweil area.

“The rebels on Sunday launched attacks on Malek Gumel but they were repulsed. At least four civilians were killed and four soldiers from our side were injured. Also, two soldiers were killed during fighting,” said Chan.

He added, “Two rebels including a Major were killed from the rebel side. They ran away and we do not know the number of rebels wounded during the fighting.”

He pointed out that at least 10 soldiers were killed and 18 others wounded from their side. Mareng claimed that they killed dozens of government soldiers during the clashes.