Government lashes out at Malong over request to join peace talks 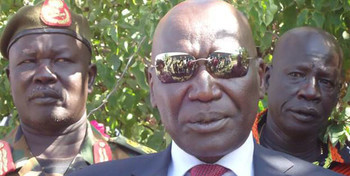 “That is a warlordship, because there is no reason for General Malong to be part of an agreement signed when he was still the chief of general staff,” presidential spokesman Ateny Wek Ateny told Radio Tamazuj on Sunday.

“Malong was at the highest level of the government when President Kiir signed the 2015 peace agreement, so it was Malong who was the chief of the army,” he added.

The presidential spokesman further said Malong should feel shy for requesting to join the revitalization process of the 2015 peace agreement.

“Now he wanted to join the revitalization process of the same peace agreement that was signed when he was the army chief as part of the rebel groups,” Ateny said.

Gen. Malong, who formed a rebel movement earlier this month, wanted to be included in the peace talks between the government and the opposition in Addis Ababa, Ethiopia.

It remains unclear whether Malong’s request has been accepted by the regional bloc or not.