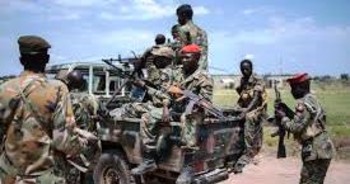 Government soldiers carried out extensive abuses against civilians during counter-insurgency operations in Yei River State between December 2018 and March 2019, Human Rights Watch said in a report on Tuesday.

The soldiers shot at civilians, looted extensively, burned homes and crops, and chased thousands of residents from their villages, the international rights group said in the report.

The group further said it also documented accounts of rape and sexual violence by soldiers.
“Civilians are being targeted, killed, and raped, as government operations try to root out rebels in Yei River state,” said Jehanne Henry, associate Africa director at Human Rights Watch. “All parties need to put a stop to the crimes against civilians and ensure accountability, while the government should help people regain their homes and livelihoods.”

Between March 14 and 21, Human Rights Watch said it interviewed 72 displaced people in Yei River state who witnessed the government operations in various locations in Mukaya and Otogo counties.

“While government soldiers were responsible for most of the abuses in the recent operations, rebel groups have over the past two years also attacked civilians and prevented aid workers from reaching civilians in need,” the report said.

“In response to NAS attacks on their positions, starting in December, government forces began operations against the groups in parts of Yei, Lujulo, Morobo, Mukaya, Otogo, and Mugwo counties,” The group said in the report, adding that the operations caused approximately 9,000 people to flee to the town of Yei and another 5,000 to the Democratic Republic of Congo.

“In early March, operations displaced approximately 1,400 more people into Yei, according to officials of UNHCR, the United Nations refugee agency.”

The report stated that Yei River state authorities have denied the scale of displacement.

The Yei River state governor, according to the new report, said that soldiers were “sometimes undisciplined” but that the crimes were not government policy.

Human Right Watch stressed that the government of South Sudan has yet to address accountability, including by making progress in establishing an African Union hybrid court envisioned in the peace deal.

Authorities should go a step further and ensure all displaced people in need have access to humanitarian aid, Human Rights Watch said.

Army spokesperson Gen. Lul Ruai Koang told Radio Tamazuj on Tuesday that they had not read the report. “I cannot comment on the report without reading it first. The army leadership also needs to sit and discuss it,” he said.