Gov’t says it will renew mandate if next talks fail 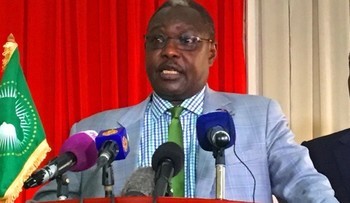 The South Sudan government on Wednesday said failure to achieve peace in the next round of peace talks in the Ethiopian capital, Addis Ababa will force the government to renew its mandate. The statement followed immediately after the IGAD announced postponement of 26th April rounds of talks.

Speaking on Wednesday at the State House after a meeting with the African Union Peace and Security Council Martin Elia Lomuro, Cabinet Affairs Minister stressed that all parties to the talks must be ready to focus on the objectives of the talks, saying the government position remains the same.

Elia also called on the mediators to come up with proposals in the next round of talks so that an agreement is reached.

“Failure to achieve peace, we will have to renew the mandate of the government. We cannot leave this government without a mandate. This is about national security, this is about sovereignty of the country and the interest of the people of South Sudan,” Elia said.

For his part, the AUPSC chair and Nigeria’s Permanent Representative to the African Union Bankole Adeoye said the talks are the best option for peace in South Sudan and they fully support the process.

“What is most important is there is one African Union and that includes all IGAD members. There is no plan B for us at this stage. The only plan we have for is this is the best window of peace and that best window must be explore to the best. The AU supports the current process and the AU is fully behind the IGAD process and with that in Africa we cannot plan for a failure,” Adeoye said.