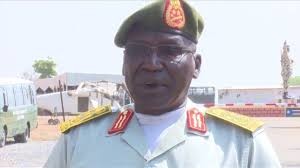 The Interim Chairman and Commander-in-Chief of the breakaway faction of the SPLM/A-IO, General Simon Gatwech Dual, last week wrote a letter inviting the Chairman of the South Sudan United Front/Army (SSUF/A), Gen. Paul Malong Awan to attend a leadership conference at his base in Kit-Gwang, Upper Nile State.

The letter which Radio Tamazuj has seen and is signed by Gen. Gatwech stated that the leadership conference is scheduled for 30 September.

“The SPLM/A (IO) is honored and pleased to invite you to attend the Kit-Gwang leadership conference scheduled to take place on 30 September at Kit-Gwang General Headquarters. As a comrade in the struggle it would be such a huge privilege to have you with us at this historical event,” Gen. Gatwech’s letter read. “Your graceful presence at the Kit-Gwang leadership conference will give the people of South Sudan hope that it is possible to achieve just peace, democracy, justice, and fundamental change in South Sudan.”

Major General Dickson Gatluak Jock, the SSUF/A Deputy Chief of General staff for administration and finance, confirmed that his group received the invitation to the Kit-Gwang leadership conference and said it was a good idea for the opposition forces to ally.

“The of SSUF/A last week received the invitation from SPLM/A (IO) and this is a very commendable idea from the interim chairman of the SPLM/A (IO), Gen. Simon Gatwech, to invite Gen. Malong to join him in Kit-Gwang. As I am talking to you, consultations are ongoing between the two leaders,” Gen. Gatluak said.

He added: This idea that the two groups come together is very important. Gen. Gatwech and Gen. Malong, need to forge a strong alliance and work together. It will give the two political movements, or the opposition under SSOMA and those under SPLM/A (IO,) military and political weight. It will also bring unity among the people of South Sudan and other political groups.”

Gen. Gatluak said the South Sudan government is not ready for peace as evidenced by the long duration the Rome talks have taken without results.

Gen. Gatluak lambasted President Kiir for pulling out of the Rome Initiative under the mediation of the Community Sant’Egidio and said the government’s withdrawal from the talks amounted to a declaration of war.

“Since January 2020, a lot of documents have been signed. One of them is the Rome Declaration to cease hostilities. All those documents were signed but nothing worked out. It is a clear indication that Salva Kiir is not for peace and playing delaying tactics,” Gen. Gatluak said. “For President Kiir to again say that he has pulled out of the Rome peace talks, what does it tell South Sudanese? When someone tells you that he does not want to talk to you, it is a declaration of war.”

He said President Kiir has declared war on SSOMA prompting all the opposition movements to come together.

“So we accepted the invitation, consultations are going on, and soon the leaders are going to say what the way forward is,” Gen. Gatluak concluded.

Feature: Does the split within the SPLA-IO have any impact on the R-ARCSS?

INTERVIEW: Gen. Olony says they are negotiating with President Kiir