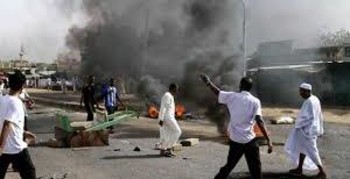 At least four South Sudanese citizens were found shot to death in the capital Khartoum as violence and anti-government demonstrations continue to grip Sudan.

Last week, Sudanese government said 19 people were killed in clashes between anti-riot police and protesters in the protests, which began on 19 December. Human rights group Amnesty International has put the death toll at 37.

Ambassador Wol offered condolences to “the families of the South Sudanese citizens who died,” describing the incident as “unfortunate”.

"They were killed in different places since the protests began in Khartoum,” he said.

The embassy has set up a committee to monitor the current situation closely, he said.

The South Sudanese diplomat urged his citizens in Sudan to be cautious in the ongoing protests.

Sudanese officials could not immediately be reached for comment.

On Monday, Sudanese police used teargas and live bullets to disperse thousands of protesters who attempted to march on the presidential palace to demand that Omar al-Bashir, Sudan’s president of 29 years, step down.