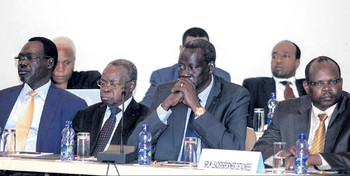 File photo: Former detainees at the roundtable negotiations on June 16, 2014 in Addis Ababa.

The former political detainees have called on armed opposition groups to cease violence and government to allow freedom of speech to create an enabling environment for peace in South Sudan, a member of the national dialogue committee said.

The former detainees are a group of high level SPLM leaders who were arrested and released at the start of the South Sudan Civil War in December 2013 before going into exile in neighbouring countries.

Betty Achan Ogwaro said during the closing of a two-month seminar for members of the national dialogue in Juba on Friday that the former detainees said during a meeting in Kampala last week that the armed opposition should reciprocate the unilateral ceasefire declared by President Kiir.

Agwaro pointed out that the former detainees expressed concern over the blocking of news websites of some independent media outlets in the country.

“They [former detainees] said we have noted that there are some websites that have been blocked from South Sudan. Our response was yes some websites were blocked because these people when the president announced freedom of speech instead of now picking up the positive they continued to go antagonistic to the government, so these were our responses” Ogwaro said.

Ogwaro, who is a former agriculture minister, pointed out that the national dialogue committee reassured the former detainees during the Kampala meeting that there will be a dialogue between the government and the media over the matter.

She pointed out that former detainees have not set any conditions for their return to Juba but they proposed that the government should create a conducive environment for peace and dialogue in the country.

The national committee member revealed that the former detainees said press freedom and cessation of hostilities are important enablers to make peace to be discussed in an enabling environment in the country.

“The former detainees did not talk about problems more than suggestions. Their suggestions are what could be conducive to make peace available to South Sudan easily,” she said.

Last week, three factions of South Sudan's SPLM party including the former detainees agreed in neighbouring Uganda to set aside their differences and work out mechanisms to reunify the ruling party.