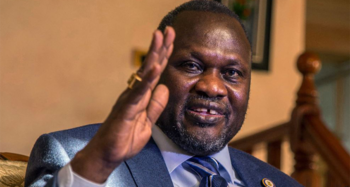 Leaders of Ethiopia and Kenya have informed South Sudan’s opposition group that the region intends to bring an end to Riek Machar’s forced confinement in South Africa, a senior rebel official said.

South Sudan’s former First Vice President turned rebel leader is being held in South Africa to prevent him from going back to his country.

The decision was reportedly reached by IGAD countries in order to keep him away in the hope of preventing fighting in the world’s youngest nation.

Manawa Peter Gatkuoth, a senior opposition official loyal to Riek Machar, told Radio Tamazuj yesterday that the leaders of neighbouring Ethiopia and Kenya have confirmed to them that they are pushing for the release of Machar in order to be part of the peace process in South Sudan.

Manawa, who is a former Jonglei state minister of physical infrastructure, pointed out that the government’s plans that removing Machar from circulation would be a blow to his opposition faction and could sway the ongoing conflict have failed.

However, he said the region has not yet notified the SPLM-IO faction about the date for Machar’s release in South Africa to engage in the peace process.

“But we are in contact with the relevant authorities in the African Union, IGAD member countries and the United Nations, so the SPLM-IO leadership is working to address the chairman of IGAD on the release of Riek Machar,” he said.

The opposition official slammed President Kiir for saying that the decision to exclude Machar from returning to the country was decided by IGAD member countries in the hope of preventing renewed conflict in the country.

“What was said by President Kiir contradicts the constitution and the country’s sovereignty because the president is the one responsible fully for the security of the country. Actually the detention of Riek Machar came after a request from the government and the idea was supported by some IGAD countries,” he said.