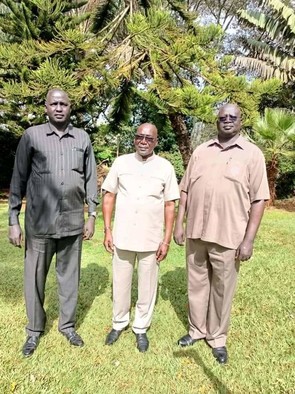 General Stephen Buay Rolnyang, who was in August 2019 stripped of his rank and discharged from the South Sudan People's Defense Forces (SSPDF), on Monday declared that he had joined Gen. Paul Malong’s South Sudan United Front/Army (SSUF/A).

The litany of reasons he gave for joining SSUF ranged from an attack on a cattle camp in his village to the usurpation of power in Juba by the Sudanese National Congress Party (NCP), poor welfare of SSPDF soldiers, tribalism, and corruption among others.

“This is to inform all the people of South Sudan that today on 3/5/2021, I have joined the South Sudan United Front/Army (SSUF/A) under the leadership of General Paul Malong Awan,” Gen. Buoy wrote in a press release.

“Today on 3/5/2021, The new commissioner of Mayom County Mr. Chuol Gatluak, brother of security advisor Tut Gatluak, has attacked our cattle camp of spiritual leader Gai Machiek Ruathdheal. The fighting which involved the use of government artillery and tanks on the cattle camp lasted for three hours,” Gen. Buay charged. “Many people were killed and wounded in the attack. The commissioner was ordered by his brother Tut Gatluak to mobilize all the Bul armed youths into what is so-called Bul Rapid Support Forces (RSF), but the armed youths of this cattle camp refused to be mobilized and as a result, the commissioner ordered the forces to attack the cattle camp.”

He alleged that the group has taken control of the president through General Akol Koor and sidelined the real SPLM members from interacting with the president.

The estranged General also blamed President Salva Kiir and his government for failing to cater to the welfare of SSPDF soldiers.

“President Kiir and his government have failed to take care of the welfare of our gallant forces. The SSPDF faces a lot of challenges including problems regarding logistics, and sustainment, lack of mobility, poor tactical communications, lack of new equipment, lack of competent command and control, and lack of salary,” he wrote. “A soldier receives only one thousand SSP (1000) per month, the amount which cannot buy anything in Konyo -Konyo market, in an army that is largely married.”

According to Gen. Buay, the revitalized peace agreement and its implementation is deliberately frustrated and delayed by the NCP.

He said Vice President Riek Machar is under house arrest in Juba and this implies the peace agreement is dead.

“1st Vice President Riek Machar Teny is under tactical office arrest until some of his forces got frustrated and melted either into the civil population or joined the SSPDF, this indicates that there is no peace agreement in the country,” According to Gen. Buay.

“Gen. Stephen Buay Rolnyang joined us this (Monday) morning from Juba and the reason is that his people in Mayom are being recruited into a militia by force by the government but they do not want and now there is fighting,” Duang said.

According to Duang, Gen. Buay was stripped of his military rank by the SSPDF last year and it was done unconstitutionally.

“And since then they have restricted his movement in Juba and they have been monitoring his house and his movement. So he has been unfairly treated from 2018 when he was put under house arrest for a year and a half until he was sent away from the SSPDF,” Duang said. “So there is so much going on and he has been suffering a lot and he could not control it anymore.”

Asked how many officers and men the general crossed over with, Duang said, “He joined us with his forces who are now fighting in Mayom but we cannot give you the number of the forces with him because of security reasons.”