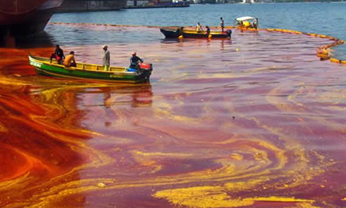 A water body contaminated by an oil spill. Internet photo

Local authorities in Ayod County of Jonglei State have warned of a health crisis due to water contamination caused by suspected untapped crude oil in the north-western outskirts of Ayod town.

James Chuol Jiek, the Ayod County commissioner, told Radio Tamazuj that the situation could deteriorate as the pollution has continued without intervention since last week.

“The floodwaters all over the area of Lowiir, Pagil Payam have turned reddish. The pollution was detected five days ago by fishermen in that area,” Commissioner Chuol said.

He called on the state and national authorities to intervene by assessing the area before the situation worsens.

“The pollution might have been triggered by the floods because no extraction has ever taken place here,” Commissioner Chuol said. “Now some people have started vacating but we do not know the extent of the damage so we are calling for an intervention.”

Simon Unite Khor, a youth leader in Ayod, said the population has been affected and called on the government to intervene.

“The animal and human populations have been affected. Some people are vacating on their own using canoes so we want the government to assess the area then it will be seen what needs to be done,” he said.
For his part, William Kuol Chol, the state gender and social welfare minister said they have been informed about the situation in Ayod and that experts will soon be dispatched there to carry out an assessment.