Skip to main content
Toggle navigation
Home News Delay in the formation of gov’t, officials contradict each other
JUBA - 19 Feb 2021

Delay in the formation of gov’t, officials contradict each other 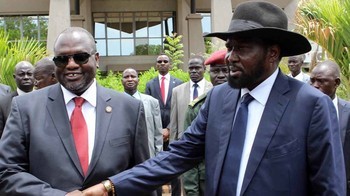 Different government officials and a representative of the Other Political Parties (OPP) have given different reasons for the delay in the formation of the national parliament, state assemblies, and state and local governments.

At the beginning of the month, Nhial Deng Nhial, the minister of presidential affairs told a press conference that a meeting of the presidency had resolved to complete the formation of all tiers of governments on the 15 February.

Stephen Par Kuol, the Minister of Peace Building, in the Transitional Government of National Unity (TGoNU) told Radio Tamazuj on Wednesday that the delay in the constitution of institutions of state governments, the national parliament, and government commissions was due to the economic crisis and the Covid-19 pandemic.

"We sorted out all arrangements to complement the formation of institutions of the transitional government, but the coronavirus pandemic affected everything, even staff in the president's office were affected by Covid-19 and as you also know, the declaration of state governments’ needs money," Minister Par said.

The minister stressed that the formation of all government institutions requires a lot of money which the government does not have.

“Nothing is happening. We have problems in the country and the price of crude oil on the international market has also dropped. All these issues plus institutional weaknesses have led to a lack of money. We are a new nation and we have been at war yet every nation needs stability to develop its economy.”

Par said international partners and donors made it clear to them that they will not fund the implementation of the agreement due to a lack of trust.

“They have refused. They told us honestly and directly from the beginning that they do not trust us and were waiting to see,” he added.

According to Minister Par, several officials in the presidency, the central bank, and the ministry of finance contracted the coronavirus and are in isolation, and that this has affected government work and subsequently the formation of governments.

For his part, Ateny Wek Ateny, the press secretary to President Salva Kiir, said that the procedures related to the formation of the transitional governments have been completed and that the governments are expected to be announced at any time.

Ateny denied that that Covid-19 was a factor in the delay despite admitting that over twenty officials in the president’s office have tested positive.

Meanwhile, Albino Akol Atak, a representative of the Other Political Parties (OPP) said his outfit, despite internal disagreements, had completed all arrangements related to nominations and power-sharing in the states and that they were just waiting for the announcement.

“We have submitted out lists for the parliaments and state government but as you know there are always disagreements and we don’t agree 100 percent,” Akol said.