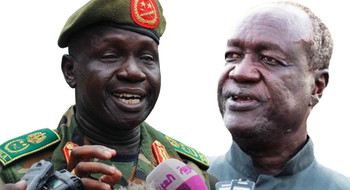 South Sudan’s defense minister has given rebels an ultimatum to declare their readiness to declare a cease-fire and join peace, or face government offensives.

Minister Kuol Manyang Juuk struck an unexpectedly non-reconciliatory tone, saying the government will give the opposition 30 days only to join the government.

Addressing the joint operation force in Juba on Monday Kuol said: "We will give them [rebels] 30 days. So anyone who fails to come after 30 days, we will consider him as an enemy and we will crush him.”

The top government official in charge of the country’s security pointed out that President Kiir’s general amnesty to those taking up arms against the government will not remain open-ended.

“The door cannot be left open. The president has announced the general amnesty several months ago and the First Vice President has also been calling upon those people to come to the government but they refused,” said.

Kuol emphasized the need for one army in South Sudan.

“The general amnesty said by the government does work because the government said it has given an offer of amnesty to political prisoners but those of James Gatdet and others are still under detention. So if the government wants to fight us we are also ready,” said Lam.

The United Nations said recently that the conflict had left 1.89 million people internally displaced, while another 1.97 million were refugees in neighbouring countries.