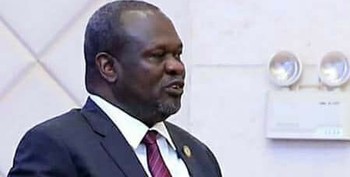 Two main rebel groups have rejected to initial the peace agreement in Khartoum, saying it failed to dilute the strong power base of the incumbent government led by President Kiir.

Speaking to Radio Tamazuj on Tuesday, Deputy Spokesman of the SPLM-IO group Manawa Peter Gatkuoth said they declined to initial the peace agreement this afternoon, pointing out that the decision making mechanisms and quorums in the deal didn’t take into consideration the increase in numbers of the presidency, the executive and the legislature.

“The government will have 20 ministers in the cabinet plus the president and the two deputies, so the government can hold a cabinet meeting and decide to pass anything without the opposition,” he said.

He further said the peace deal nullified the principle of collegial decision making in the unity government.

The opposition official said that the issue of states was removed from the semi-final draft agreement. “We don’t want to sign a peace that will cause more suffering to the people of South Sudan. We have submitted our concerns to IGAD and they will look at those points,” he said.

For his part, Joseph Bangasi Bakosoro, a leading member of the South Sudan Opposition Alliance (SSOA said the peace agreement failed to address the issue of states.

“The SPLM-IO and the SSOA have decided not to initial the current peace agreement. We want our concerns to be addressed first so that we sign a comprehensive peace agreement,” Bakosoro said.

Meanwhile, Sudan’s Foreign Minister Al-Dirdiri Mohamed Ahmed said it came as a surprise to him after the SPLM-IO group decided not to sign the agreement today.

Al-Dirdiri, who is the chief negoator, said the issues raised by the SPLM team were new to him. “The issue of the quorum in the government was stated as two-third. SPLM-IO asked yesterday for the quorum to be raised to three-quarters, so this issue was not part of our mandate. It was not part of the bracketed issues referred to us, so we cannot determine that matter unless it is accepted by all parties, and it was not accepted by all parties, “said.

“Secondly, the issue of reviewing the mechanism for constitutional making, it was not bracketed and it was not referred to us here by the IGAD. We discussed the matter at the request of SPLM-IO and the IO made its presentation and other parties objected to it,” he added.