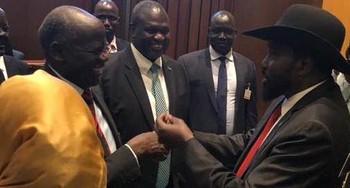 South Sudanese arch-foes this evening signed a peace agreement, aimed at ending the devastating civil war that has killed tens of thousands of people and displaced millions.

President Kiir and opposition groups, including his arch-rival Riek Machar signed the final deal in Ethiopia, under which the main opposition leader is set to return to a new unity government as first vice presidents, one of five vice presidents.

As part of the signed power-sharing deal, Kiir will remain president.

The deal, which paves the way to peace and stability in the war torn country, was signed in the presence of Ethiopia’s Prime Minister Abiy Ahmed and his counterparts from the region, along with foreign diplomats.

The rival leaders under the terms of the new deal will have eight months to form a transitional government, which will run for three years.

The final deal come as part of a regional push aimed at achieving peace in the world’s youngest nation.

The IGAD Council of Ministers in its meeting in Addis Ababa this afternoon nullified some of the five reservations expressed previously by the warring parties in Khartoum.

The head of IGAD's Joint Monitoring and Evaluation Commission (JMEC) for South Sudan, Festus Mogae, has officially resigned after the parties signed the peace accord to allow new leadership during South Sudan's new government.

He congratulated the conflicting parties of South Sudan for taking the decision to make peace in the country.

The activist urged the parties to implement the peace deal in good faith.

Yakani, who is the executive director of the non-profit Community Empowerment for Progress Organization (CEPO), said they want 12 September declared as a national day for transforming the society from violence to peace.

The US-based Enough Project said the peace deal signed in Addis Ababa between the government and armed opposition groups has significant flaws, including failing to address the looting by leaders of state resources and revenues.

The group said these shortcomings could easily lead the country right back to full-scale war.

John Prendergast, Founding Director of the Enough Project and Co-Founder of The Sentry, said: "Today’s peace deal lacks meaningful checks and balances on a presidency that already wields immense powers, which are primarily used to loot the country’s resources and deploy extreme violence against opponents. South Sudan’s vast oil revenues have been pocketed by high-level politicians and their families and carted out of the country. This new peace deal fails to undo the theft of government revenue by entrusting the same corrupt politicians without any meaningful checks and balances."

Meanwhile Brian Adeba, Deputy Director of Policy at the Enough Project, said: "This peace deal is simply a division of the spoils between the rival factions with the biggest guns. The signed agreement reinforces the status quo and increases the odds of a full-fledged return to war, in its failure to address state capture by these politicians or reform in hijacked institutions. The U.S. and other willing nations should impose sanctions and anti-money laundering measures on the networks of South Sudanese officials and their commercial collaborators who continue to loot the country’s resources and to deny them access to the international banking system."

Do not squander opportunity for peace again – Mogae tells parties