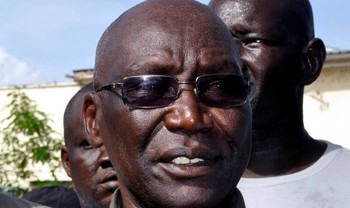 File photo: Paul Malong addresses the media after returning to Juba, May 13, 2017. REUTERS.

“I have arrived in Malek Gumel. I have joined General Agany because I have been chased away by the government,” Manut Yel Lual, an ally of former military chief, told Radio Tamazuj this evening.

Manut, who was a tax collector and former Madhol commissioner, said he and other people decided to leave their homes in Aweil East because they were being targeted by the government.

He claimed that he joined the rebels with 1,500 soldiers including officers.” I joined General Agany because I was chased away in South Sudan. We will be together with Agany,” Manut said.

The rebel group commanded by Agany Abdel-Baqi, who is a native of Aweil, has been fighting to topple Kiir’s administration.

Malong's top aide: "I was forced to be a rebel"