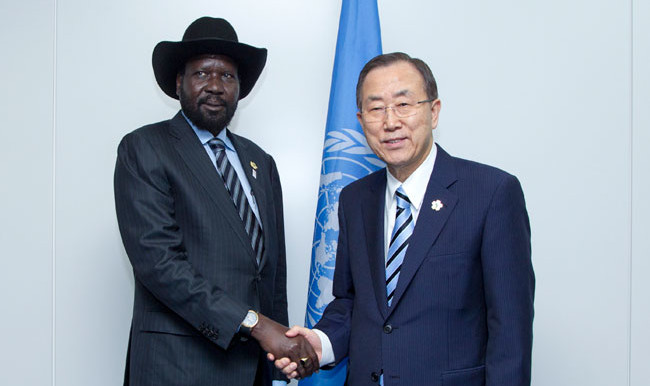 The two delegations discussed issues related to the problems between Sudan and South Sudan, including the final status of Abyei, insecurity and rebellion in both countries, according to the Minister for the Office of the President, Emmanuel LoWilla, who accompanied Salva Kiir.

“The other topics Ban raised with the President were the issues of SPLM-North, South Kordofan, and southern Blue Nile. He stressed to the President that these groups need to meet with President al-Bashir next month, possibly in Addis Ababa,” the Minister said.

“President Kiir argued that these people have a reason; a cause, which needs to be addressed; and the cause can only be addressed politically, not militarily,” LoWilla continued.

The Secretary General expressed his appreciation to South Sudan for making efforts to consolidate peace, the Minister said.

President Kiir “blamed” his Sudanese counterpart Omar al-Bashir for refusing to accept the African Union (AU) decision to conduct a referendum in Abyei in October 2013:

“President Kiir said that President al-Bashir is the only one who is making the Abyei issue difficult. It has been made clear by the AU that its High Implementation Panel was ready to hold a referendum for Abyei in October,” Minister LoWilla said.