Analysts say the Sudanese agreement is a positive step forward 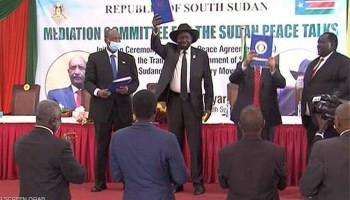 Political analysts say the Juba Agreement between the Sudanese parties is a positive step towards addressing Sudanese issues but does not address the root causes of the crisis.

On August 31, the transitional government in Sudan signed a peace agreement with the rebel alliance Sudanese Revolutionary Front.

Atem Simon Mabior, a journalist and political analyst told Radio Tamazuj Thursday, that the agreement focused on addressing the needs of the political elite rather than addressing the root causes of the crisis.

"This agreement is based on partnership more than accountability and consideration of the basic issues, and it needs the participation of all parties, especially groups that are concerned with the root causes of the crisis," he added.

Simon stated that the agreement will hold if it is welcomed by the Sudanese people and the transitional government, noting that the Sudanese populace has a different view for resolving the Sudanese crisis.

He further added that the absence of regional support for the Juba agreement would also pose a challenge to its implementation.

"This agreement was signed in a hurry, so it was signed without an implementation matrix, and this is a dilemma,” Simon said.

For his part, Stephen Amin Arno, a Ph.D. student of International Relations, Conflict, Peace, and Security said that the demand for autonomy for the people of the two areas in the agreement was included to counter the demand for the right to self-determination for the SPLM-North Al-Hilu wing. He described the autonomy clause as "vague."

"The autonomy clause was fronted as a rival proposition to self-determination. Yet the power-sharing process is not detailed, it is left loose and can cause major political issues," he added.

Arno further told Radio Tamazuj Thursday that the agreement mostly focuses on power-sharing instead of addressing the issues of transitional justice.

An SLM faction led by Abdel -Wahid Mohamed Nur and a faction of the SPLM-N headed by Abdelaziz Adam al-Hilu refused to take part in the agreement.

The agreement is aimed at ending Sudan’s years-long civil wars after a power-sharing deal between the military and a pro-democracy movement following the overthrow of former president Omar al-Bashir in April 2019.

Fighting between the Sudanese army and rebels in the Kordofan and Blue Nile regions broke out in 2011, and conflict in Darfur began in 2003.