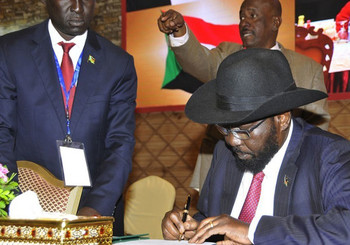 The Agreement initialled by the South Sudan’s government, the SPLM-IO, Other Political Parties OPP and rejected by the South Sudan Opposition Alliance SSOA and FDs, provides that a National Pre–Transitional Committee (NPTC) shall be formed by the President of the Republic of South Sudan within two weeks of signing the Revitalized ARCSS:

The pact dubbed “Agreement on Outstanding Issues of Governance” was signed on Wednesday in the Sudanese capital Khartoum, as part of the Igad-led High-Level Revitalization Forum HLRF of the 2015 Agreement on the Resolution of the Conflict in South Sudan ARCSS.

The Agreement provides that the NPTC shall be formed of ten members representing the Parties: five (5) for the Incumbent TGoNU, two (2) for SLPM/A-IO, one (1) for SSOA, one (1) for FDs, and one (1) for OPP. It says the NPTC shall be chaired by TGoNU representative with two Deputy Chairs to be nominated by SPLM/A-IO and SSOA respectively, and the body shall adopt its decisions by consensus.

Functions of the NPTC

The Agreement provides that the NPTC shall be entrusted with the function of oversight and coordination of the implementation of the activities of the Pre– Transitional Period stated in Article 6.3 of the pact in collaboration with the Incumbent TGoNU.

According to the Article 6.3, the activities that shall be undertaken during the agreed eight (8) months Pre–Transitional Period shall include:

1-Dissemination of the Revitalized ARCSS to South Sudanese people inside the country, in different cities and refugee camps in neighboring countries, and in diaspora, so that the people can understand, support and own it.

2-Carrying out the tasks entrusted to the IBC and the RCNBS.

3-A process of national healing and reconciliation that shall be led by the Parties, churches and civil society groups inside and outside of the Republic of South Sudan.

5-Incorporation of the Revitalized ARCSS in the TCRSS.

6-Reviewing and drafting necessary bills as per the Revitalized ARCSS.

7-Any other activities agreed by the Parties.

“There shall be established a fund, to be drawn from oil proceeds and contributions of donors, for the implementation of the activities of the Pre–Transitional Period. The fund shall be deposited by Incumbent TGoNU in an escrow account in a bank agreed to by the NPTC. The NPTC shall manage the fund transparently and report on it monthly to the President of the Republic of South Sudan and to the Parties,” says Article 6.8 of the Agreement.

FDs position on the NPTC

The FDs, in their press statement rejecting the (Proposed) Agreement citing several reasons, argued that the NPTC should be set up by IGAD in consultation with the parties and “its composition shall include IGAD.”

“With respect to Article 6.8 (of the Proposed Agreement) we propose that NPTC be established by IGAD and that the monies are deposited transparently and on time to the NPTC escrow account,” The statement signed by Pa’gan Amum Okiech on behalf of the FDs partly read.

Will there be a breakthrough on the NPTC?

It remains unclear if the government and the parties will reach a breakthrough on the NPTC and the rest of the contentious issues of governance to ensure inclusivity in the Agreement which is expected to be formally signed on August 5 in Khartoum in a ceremony, reportedly, to be attended by the IGAD heads of state and government.

The FDs have acknowledged that “considerable ground” has been covered during the IGAD-led peace process in Khartoum adding that they “remain committed to constructively engage in this process with the mediation and with other parties in order to achieve just and sustainable peace for the people of South Sudan.”

On the other hand, South Sudan’s government Spokesman Michael Makuei has called upon the parties to join the Agreement but added that “those who did not sign the agreement are insignificant and we will continue without them if they do not join us.” Reacting to this, the former Western Equatoria State Governor Joseph Bagasi Bakosoro who currently leads the opposition South Sudan National Movement for Change (SSMC) which is also part of SSOA told Radio Tamazuj: “If the minister of information says we are insignificant, let them go ahead with their peace and we will see whether they will succeed or not. I think it is not wise to say that your brother is insignificant.”

Bakosoro said the conflict will erupt again if the root causes of the ongoing civil war are not addressed, adding that his group will never sign “a fragile peace agreement.” The former governor further said they are open for discussions with the mediation team and that his group’s “door is still open for talks if the government and SPLM-IO accept to reconsider their positions.”

On his part, the Sudanese foreign minister and chief mediator Al-Dierdiry Ahmed reportedly said they would continue their efforts to bring the holdout groups to sign the agreement.

Meanwhile, the Trump administration on Sunday, in a statement on the South Sudan Peace Process, said “a narrow agreement between elites will not solve the problems plaguing South Sudan” adding that “In fact, such an agreement may sow the seeds of another cycle of conflict.”

“The United States will not be a guarantor of any agreement, and will not fund—or call for additional United Nations resources to support—the transitional government, in the absence of a sustained, demonstrated commitment to peace, inclusivity, financial accountability and good governance,” partly read the US statement.

Will the South Sudan government and the Parties reach compromises on the remaining contentious issues of governance and make an inclusive, comprehensive agreement on the same between now and August 5?

Roger Alfred Yoron Modi, a South Sudanese journalist, is the former Managing Editor of Juba Monitor Newspaper and former Chief Editor of Bakhita Radio. He can be reached via his email:rogeryoron@gmail.com