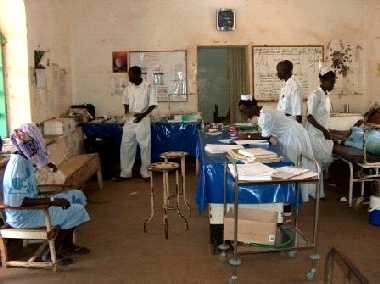 Agok Administrative Hospital has reported worsening health conditions as more infectious diseases spread among the local population. Francis Kuot Deng, the medical director of the Agok Administrative Hospital, stated that the region is witnessing a terrible deterioration amid growing rates of malaria, diarrhea and intestinal infections with a significant shortage in medicines.

Deng warned of a disaster due to lack of medicine as he stressed that there were no medicines in Agok and the whole of Abyei. He stated that the region received a share of medicines for three months and that share has finished, adding that in some cases even painkillers like Panadol as well as other medications are lacking.

The doctor attributed the increasing rate of malaria and diarrheal infections to the rainy season and the increase in humidity, asserting that children and mothers suffer from intestinal diarrhea in light of the absence of medications and health personnel in Agok since the renovation of the Abyei Teaching Hospital. He stated that the renovations led to the migration of health workers from Agok Administrative Hospital to Abyei Teaching Hospital, which is about 30 kilometers north-west of Agok.

Deng appealed to concerned parties to expedite assistance in the health sector.