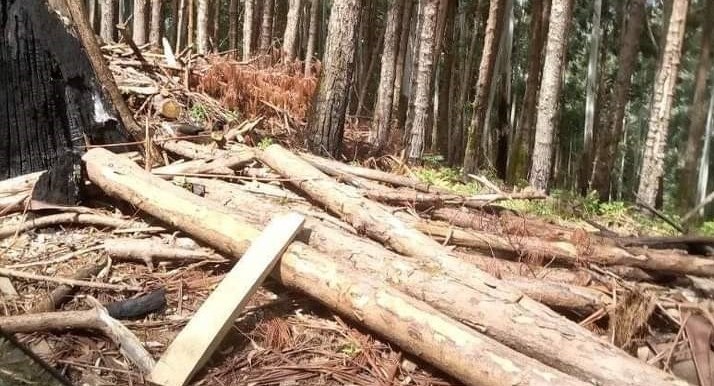 At least six Ugandan nationals and four South Sudanese have been arrested in Pajok of the defunct Ayachi County in South Sudan’s Eastern Equatoria state for illegal timber logging.

The suspects arrested over the weekend were brought to the state headquarters police central division in Torit on Monday for further investigations and trial.

Maj. Justine Kleopus Takuru Yanga the area police spokesperson told Radio Tamazuj this afternoon that this is the fifth reported case of logging in the state.

“These people are 10 in number, four are South Sudanese from Acholi tribe and we have six foreigners from Uganda. So these people entered the forest and after cutting a big number of trees there, the information reached the government. The executive director plus the responsible people there arrested these people, and they did not have a letter of approval,” he said.

Kleopus revealed that the suspects claim they had sought permission from the community, a process he says is wrong.

“The state had issued a decree that nobody should cut trees anyhow even the community should not. They should write a letter to the state there is a committee here formed that will study the reasons for cutting trees and if it is for the development in the state, the governor will approve but these people went in an unprocedural way," he explained.

The police officer added that two logging machines and a motorcycle were confiscated at the crime scene.

2nd Lt. Michael Koko, the Chief Inspector of Police in Ayachi said the illegal loggers were arrested through the cooperation of local youth.

"We were sent by the executive director to confirm but residents there denied and said it was not true. So we came back. But again we got information that the youth of Pajok went to the forest and arrested the loggers. So we went back and found the suspects were already arrested,” he said.

Koko stressed that the order will remain in force and anyone found disobeying it will face the law.

The ban imposed by the state governor cited rampant logging by both individuals and communities present in the counties of Magwi, Torit, and Ikotos.