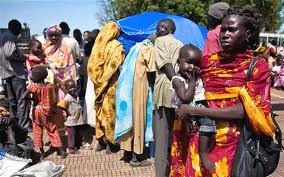 A report by the UN’s World Food Progamme says that South Sudan is about to face an acute shortage of food, with five million people, more than half the country's population said to be at risk.

The report states that armed confrontations at the border between Sudan and South Sudan, as well as the halting of the production of oil in South Sudan has affected the economy and will be ‘very devastating in the weeks or months to come.’

A number of non-governmental organisations have also warned of displaced people near the border on both sides currently facing the rainy season, which may turn the situation from a crisis into a ‘disaster’.

They say the monsoon rains expected in Sudan and South Sudan will limit movement and increase the spread of disease.

An Oxfam spokeswoman added that ‘the world should be aware of the real cost of the conflict on people who have already suffered from war for many years.’