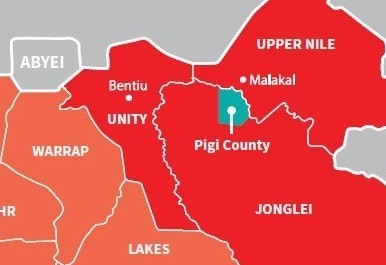 At least three people were killed when an armed group carried out a raid on a village in the Khorwai area of Pigi County, Jonglei State on Tuesday, local officials said.

“After they raided the village, they killed three women while harvesting on farms. The entire Kolnyang village is burnt to the ground. The attackers are a youth group from Piong Nuer. Tensions have been high among the local communities for a week now.”

For his part, John Agany, a lawmaker representing the area in the state legislative assembly, claimed that the death toll had reached six on Wednesday morning after the bodies of two other women and a child were found.

He also said that the village had been deserted as people fled for safety.

The local officials appeal to the national government to intervene.

On Tuesday evening, William Gatjath Deng, the military spokesperson for SPLA-IO, told Radio Tamazuj that tension was high in the areas of Khorwai and New Fangak as inter-communal violence there escalates.

The conflict between the communities of Khorwai and their neighbors in Fangak County reportedly erupted following last month’s killing of an aid worker in the Khorwai area.

Armed group kills yet another aid worker in Pigi County