250 orphans caught in between warring parties in Torit 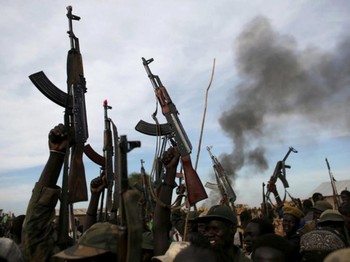 File photo: Rebel fighters hold up their rifles as they walk in front of a bushfire in a rebel-controlled territory in Upper Nile State, South Sudan February 13, 2014. /REUTERS

At least 250 orphans and their caretakers were trapped between fighting forces as government and opposition troops take up battle positions in the vicinity of an orphanage outside Torit town, a top UN official said on Wednesday.

David Shearer, who heads the UN mission in South Sudan, told reporters in Juba Wednesday that local authorities in Torit were denying access to the childrens' facility.

"UNMISS has asked for access to the orphanage, but locally, on the ground, this has been denied on numerous occasions," he said.

"I am particularly concerned about the situation there. The government and opposition forces have taken up battle positions on either side of an orphanage just outside the town,” he added.

He pointed out the government forces in Juba gave UNMISS the go-ahead to send peacekeepers to the orphanage. “I’m hopeful that will happen today (Wednesday),” he said.

Shearer urged both sides to reflect on President Kiir’s Independence Day message of peace and withdraw from the orphanage.