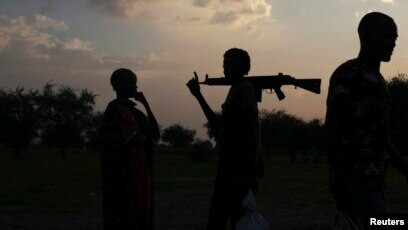 At least two people have been killed and one wounded in the wee hours of Wednesday morning when alleged SPLA-IO forces attacked a chief's house in Western Bahr el Ghazal state's Jur River County.

According to the state deputy director for police, the incident happened at Majara north of Bahrurud Boma.

"What happened is a force under Brigadier General Philip Piel Ajak yesterday attacked the house of Chief Achor and killed one of his bodyguards. And in self-defense, the bodyguards to the chief also shot and killed one person from the side of Piel Ajak forces and also injured one,” said Uguak.

Uguak said the fighting was triggered by an incident on Monday in which the opposition forces kidnapped three people in the area.

"This can be traced back to what happened last Monday when the two personnel from Piel abducted two women and rapped one before her release. The other woman is still with them since Monday,” said Uguak.

He added, “At the same place, they disarmed one of the wildlife officers, they beat him and they released him later. They went away with his gun.”