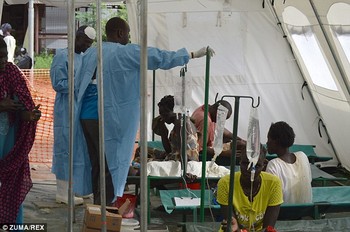 File photo: Cholera patients being treated in a tent at the Juba Teaching Hospital.

Matbar County Commissioner James Kolang told Radio Tamazuj yesterday that the cases of cholera were recorded in Matbar, Yirol and Adhang areas since the beginning of May.

He confirmed that the outbreak killed at least five people and left nearly 10 others sick. He pointed out that the patients were taken to Yirol Hospital for treatment.

“Our situation in Matbar now is very bad due to cholera. There is no any improvement in terms of cholera cases, “he said.

Cholera is an infectious disease that causes severe watery diarrhoea, which can lead to dehydration and even death if untreated. It is caused by eating food or drinking water contaminated with a bacterium called Vibrio cholerae.